Planet Earth is blue
And there’s nothing I can do

I am wearing that t-shirt now, as I type…

Am I a space-cadet, what do you reckon?

In these she speaks about the Caduceus and a Yellow {golden?} dragon and she probably spoke with a Russian accent {see dream previous post}.

These are from Vol III of the Adyar Edition of “The Secret Doctrine” by H.P.B.

Last night we attended our second Breton class and as we arrived there were two crows circling above the venue. We are in Bro Dreger {Tregor} and part of what stimulated the move was the prevalence of this flag at a festival one night in Landreger in 2019.

This is the second dream from last night and because of the symbolism, it is probably significant.

I hear on the news that there has been a strange happening in Wales in which a row of terraced houses has been painted black. I “go” to see it. It is in the upper reaches of Trealaw Road. I arrive / land on the opposite side of the street and note that the black terrace is very close to where my maternal great grandfather John Parry Jones lived with his family when they moved down from North Wales. It is near where there is a path to a footbridge over the Rhondda River to Tonypandy. I decide to walk over the bridge and travel by train back to Gravesend.

As I cross the river, I am about to enter a shopping centre precinct, I notice a young woman coming towards me holding a cylindrical object which is white and painted upon which is y ddraig aur. I look down at the t-shirt I am wearing and it is my t-shirt with the y drraig aur flag printed upon it. I suggest to her that because of this we must talk. She speaks English with a fairly strong Russian accent. She agrees.

Next, we are in her room. I take a closer look at the cylindrical object and see that it is the covering for a bronze statue underneath. I see that the dragon is slightly lopsided and say that it must be dissolved and repainted. We dissolve the dragon using a liquid and it flakes off flakes of genuine gold leaf which is very bright and almost alive. It is way more golden than the original image of y ddraig aur I saw near the river. It has come alive.

With great care she at first paints a black outline on the cylindrical cover and then begins to start the dragon. The gold on the black paint is vivid.

I say to her that it is a bit of an omen and that perhaps we are to work together. I ask her to tell me about herself, her journey.

In her Russian accent she takes me over to her bookcase and says that first she studied shamanism and pulls out a book by Kenneth Meadows. I am dumbstruck. I say that he was the first person to teach me shamanism and that this is now omen enough for me.

She then asks me about my practices. I explain that I have done an extensive recapitulation, I organised the retreats with Theun and the fact that I don’t need to recapitulate any more.

Y Ddraig Aur (The Gold Dragon), c. 1400 – c. 1416, the royal standard of Owain Glyndŵr, Prince of Wales, famously raised over Caernarfon during the Battle of Tuthill in 1401 against the English. It is evident in Glyndŵr’s privy seals that his gold dragon had two legs.

Dragons are the dreaming symbol for power or magic {at work}

The combination of these is potent.

Black is Totality / the need for wholeness and sometimes at-one-ment.

The Soul urge of Russia is seventh ray.

Ken was a Shaman

Theun was a three pronged nagal being

Crows are couriers of power

Two can be need for humility and understanding or an indication of destiny.

These are excerpted from “Return of the Warriors” by Theun Mares

Those of you of a second ray or scholarly bent might like to compare this with The Seventh Purpose of Deity posted earlier today.

I am somehow in the Welsh valleys. The road along the side of the valley is being worked on. I am driving along, and a very large mechanical digger is pilling up porta-cabins by “throwing” them. I pull my car up so as not to get caught by the digger. It continues for a while and the way is now blocked.

I then try to proceed on foot, and I cannot get over the obstacle. On the other side of the valley again and that too is blocked.

I come back to a small snow-covered area and again the way is blocked by a collision of cars. I get in one car and drive it a bit. I get out and it continues on in automatic and it crashes into the pile of cars.

I am now at a large extensive house which is in the South-East. Someone warns me that the press has come for the celebrities. As I approach the house, I see the press photographers piling out of vehicles, chasing a celebrity.  I dodge round the back of the house.

As I do this I take off and soar into the sky. I am flying around the house and observing it from above. In the courtyard at the back there is a terrace and sat there is one of the journalists. I fly over him. He is sat in an ornate writing desk. I fly past again as he reaches for his camera. I land in the courtyard.

I walk towards where he is sitting and through some “Japanese” style doors. On the floor is an exquisitely carved oriental dragon. This is “my” place. The journalist comes over and points at the dragon which is beautiful and golden.

“This is the kimono-dragon the golden dragon”, he says.

“They are searching for the golden dragon {you}. Now you are it.”

I sit down next to the dragon and begin a meal with lacquer chopsticks and oriental bowls.

I replay the entire dream several times in my mind.

This is allegedly a design for the battle flag of Owain ap Gruffydd, lord of Glyndyfrdwy or simply Owain Glyndŵr.

Here are two of my dragons and Avalokiteśvara.

I have a bit of a “thing” about dragons. I have a joke that I was aiming to incarnate in Bhutan, saw the flag of Wales and ended up in Cardiff instead. Born in the year of the dragon, in a land of dragon lore and now living in Pays du Trégor … 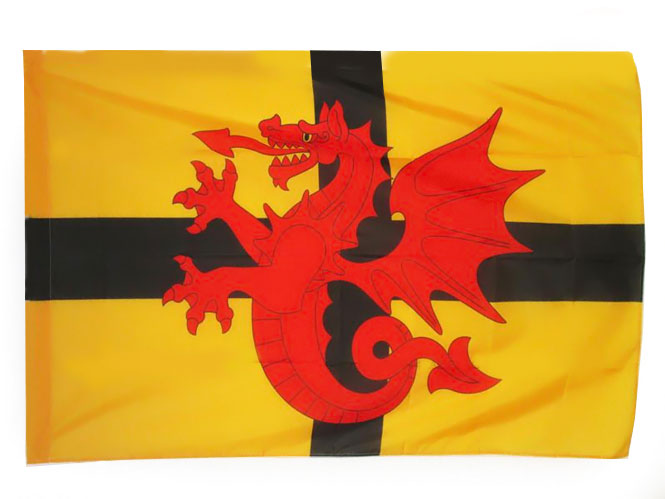 swims through the air

filled with coy and cunning

just outside the window

through the panes and leaves

with eyes that see,

in the mountain anvils

And the crying free man

and he is a most Ancient Dragon

Go now to the place

the place appointed you